The market for vehicle imports through Russian ports depends on the market for automobile salesin Russia. Transshipment market analysis shows that up to 70% of Russia’s car imports transit the terminals of the so-called ‘Big Port of St. Petersburg’ (hereafter abbreviated as BP). Changes in the Russian economy and effective demand in the Russian car market dictate the volume of imports, and, consequently, affect the income of what are known as ‘Roll On – Roll Off’ (Ro-Ro) terminals.

Over the last 10 years the fleet of cars in Russia has grown by almost 60% – from 25.57 million cars at the beginning of 2006 to 40.85 million cars by the beginning of 2015 and the ratio of cars per thousand people still remains well below European levels. The growth of the car market in 2006-2008 was mainly due to imports. After 2010 it has been mainly due to cars assembled inplantsbuilt in the north-west region of the Russian Federation. Although reducing the rate of growth in imports, this led to the export of cars via Ro-Ro terminals.

In the BP, there are more than 20 terminals. Terminal services are typically specialized by product, for example, oil, grain or metals. Some terminals (such as Petrolesport, Ust-Luga and Onega), provide several types of servicing for different types of cargo, for example: containers, bulk, Ro-Ro cargos, etc.

Until 2006, cars were delivered to Russia via Finland using Finnish terminals and then by land as there were no Ro-Ro terminals in Russia. Delivery cost reached as high as 800 Euros per car. Construction of Ro-Ro terminals as an alternative to Finnish ports began in 2006-2008.
Two projects for car terminals started development in the BP in 2006.”Oslo Marine” group together with “RTL” opened a transshipment complex “Onega” in the Sea Fish Port in 2006 (in 2007 it handled 20 thousand cars), and in 2007 LLC “Sea Fish Port” together with LLC “RTL” and “In flot Worldwide Inc” launched a new car terminal designed to handle 75 thousand cars a year. During the first half of 2008, LLC “Universal Sea Transshipment Complex “Onega” increased its turnover by 3.5 times compared to the level of the first half of 2007, to 41,987 cars.

Table 1 shows data on the turnover of the large car terminals in the BP.

The capacity of car terminals in BP during 2007-2010 was insufficient to meet demand. Figure 1 shows for the years 2006-2014 new car imports as a percentage of total cars imported and the number of cars imported each year. 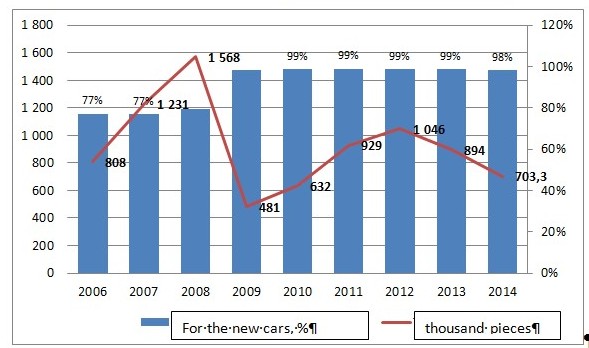 Figure 1 shows that the market for car sales and therefore car imports in Russia has been prone to wide swings in demand. Car imports declined significantly in 2009 owing to negative macroeconomic factors. The car import market recovered in 2010. The demand for cars increased due to the introduction of new loan programs and State programs for the development of the car market. A total of 632 thousand cars were imported to Russia in 2010, which was 31% more than in 2009.

In 2011-2012, car imports further increased despite the fact that the number of cars assembled and sold in Russia also significantly increased. Starting in 2013, however, imports were being replaced by expanding internal production and sale of cars. At the same time, car exports began to rise. By 2014, car imports accounted for 31% of total sales. During the 1stquarter of 2015, car imports declined to 383,691 cars as Russia’s economy contracted. 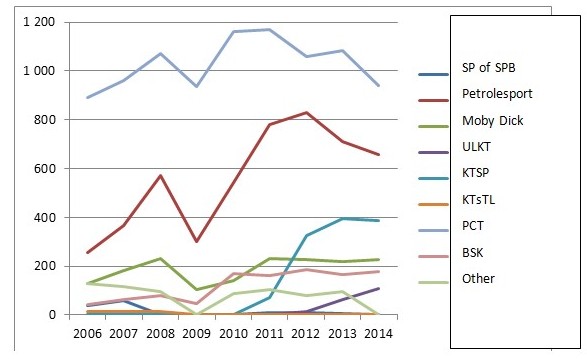 As with car imports, the market in transshipment services for container cargo declined in 2009. The economic rebound of 2010-2011 saw the turnover of container terminals in the BP grow, but the pace of growth remained weak owing to insufficient port capacities to fully serve the flow of the containers. Container turnover amounted to 2.4 million in 2011, a rise of 22% compared to 2010.The container transportation market in the BP continued to grow in 2012-2013 but in 2014 total container turnover declined to about 2 million TEU. In the first quarter of 2015 container turnover was 431.1 thousand TEU.

Analysis of container transportation capacity shows a significant increase in the rate of development of terminal infrastructure during 2006-2015 (see Table 2).

In accordance with article 4 of the Federal law No. 147- ФЗ “On natural monopolies” dated August 17, 1995, the services of sea ports are assigned to the sphere of activity of natural monopolies and they are subject to State regulation and control. In 2008 the Decrees of the Government of the Russian Federation and FSU , which set the ceiling tariffs for cargo handling and related services, were in force. The state price regulation has not been applied to the terminals of the BP since 2013.

Most terminals operate under the “user pays” pricing principle and set tariffs basedon the results of margin analysis of alternative means and routes of transportation. For example, at Ust-Lugaha the tariffs for most services are 1.5-2 times lower than the tariffs of the BP terminals. But Ust-Luga has a very significant drawback in that it requires an addition 150 km of road transportation.

Tariffs of Ro-Ro terminals providing transshipment services for cars in the BP are generated for the customer based on the list and characteristics of the transported goods, terms and delivery schedule, and service, on request. Typically, service centers or import/export departments of stevedoring companies deal with formation of tariffs and work with clients. Analysis of tariffs showed that rates for loading and unloading and the cost of car storage at the terminals, as a rule, depends on the number of cars (consignment); contractual terms with the carrier (shipping line); characteristics of the car (length, weight, specificity, etc.); period of stay on the territory of the terminal (usually from 2 to 60 days); service conditions and customs and other State-bodies control.

The price of Ro-Ro services for transshipment and storage, are based on market information about prices for similar services according to publically available data of competing companies (see above) including PLP, MPSP, MRP and other companies.

In the financial models for each valuation date, the annual forecast of the per-car price for loading and unloading services ranges from 50-100 USD (1st category, no extra movements and operations). In 2008 the average tariff per car for loading and unloading, excluding terminal storage services, ranged from 30-167 USD without VAT . These data are confirmed by regulatory documents (ceiling tariffs) and other market information that were relevant in 2008.

Calculation of tariffs for transshipment and storage of cars on each of the three valuation dates, for use in each of the three valuation models, is presented in Table 3. In summary, these data are based on all sources referenced above and all assumptions, forecasts and estimations represent my best effort to accurately quantify all variables using best available information and my own valuation experience with other port facilities.

Table 3. Tariffs per Car for Ro-Ro Services, in USD without VAT

Thus, the average tariff for processing one car in the terminal will be:

The tariff used in the valuation model is a minimum compared to the average market tariffs for similar companies, without additional services and long-paid storage. For example, in early 2009 the payment for carstorage in MPSP was 55 USD without VAT for one day of paid storage .Thus, for MPSP the rate for 2 days of paid storage was about $150 USD in 2009.

The tariffs used in the valuation models are market averages at the relevant valuation dates. Detailed calculation of the cost of loading, unloading and storage can be found in Appendix 5c along with certain published price lists for similar services.

Container tariffs
Tariffs for loading and unloading, according to the data of different carriers, vary widely, but tariffs for storage and additional services are relatively similar. Tariffs including shipping line profit (freight forwarder) range from 5% to 20%. According to market sources, the average agent’s extra chargeper container ranges from 20 to 150 USD in St. Petersburg in 2015 . Tariffs used in the valuation models do not include the cost of agent/freight forwarder intermediaries.

In the valuation models, average market tariffs for container services are used based on standard dry containers depending on the following:

Table 4 shows tariffs for loading and unloading containers depending on the type of container and whether it is for export or import. These data are used in each of the three valuation models for each of the three valuation dates. In summary, these data are based on all sources referenced above and all assumptions, forecasts and estimations represent my best effort to accurately quantify all variables using best available information and my own valuation experience with other port facilities.

Services for transshipment and storage of refrigerated, non-standard, oversized and other containers were not considered, despite the fact that the share in sales volume can reach up to 20-25%. Income from handling of such goods increases forecast income but the forecast would require far too many reasoned assumptions and conditions to be practical.

Start your valuation process today, we’re ready to work with you